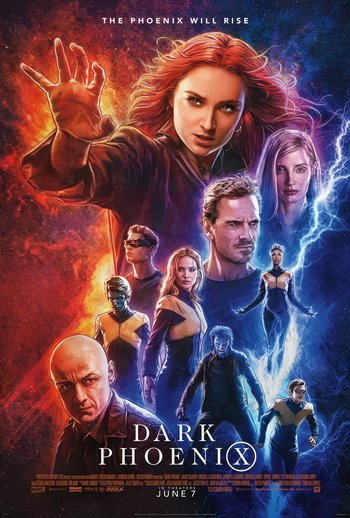 "She’s all desire. All rage, all pain. And it’s all coming out at once."
"The mind of a psychic is a fragile thing. It takes only the slightest tap to take it in the wrong direction."
— Charles Xavier/Professor X
Advertisement:

Dark Phoenix * X-Men is deliberately not a part of the movie's title for stylistic purposes, except in some international markets that the film is releasing in, as well as in some home video releases. is the 2019 sequel to X-Men: Apocalypse, and the twelfth installment of 20th Century Fox's X-Men film series. Simon Kinberg (frequent writer and producer of the franchise) made his directorial debut with the film. It was released on June 7, 2019.

As suggested by its title, Dark Phoenix is an adaptation of the iconic Marvel Comics X-Men storyline by Chris Claremont and John Byrne, The Dark Phoenix Saga, which was previously integrated into 2006's X-Men: The Last Stand, stated to be more faithful than the latter film was. It is set in 1992, following the successive decade trend set by previous films First Class, Days of Future Past and Apocalypse.

The X-Men are now famous for their defeat of Apocalypse, and Charles Xavier pushes his students to reach heights and put themselves in more danger to improve the global image of Mutants. When sent on a rescue mission into space, the team is hit by a solar flare, which awakens the entity known as the Phoenix within Jean Grey — and nothing will ever be the same for the team.

The film also has the distinction of being the last "main-series" X-Men film to be made before Disney's acquisition of Fox, with 2020's The New Mutants being the last spin-off. Prior to its release, creative control over the X-Men, Fantastic Four, and Deadpool film franchises transferred to Disney (or rather, Marvel Studios) going forward. Director Simon Kinberg has referred to this as the Grand Finale of the series, it being the "natural culmination" of all X-Men films up to this point, and in April 2019 was confirmed to be the official "send-off" of Fox's X-Men series, with Disney assuming theatrical distribution rights. The movie was also the last one in Fox's series to bear the 20th Century Fox logo, while The New Mutants was subsequently released under the rebranded 20th Century Studios name.