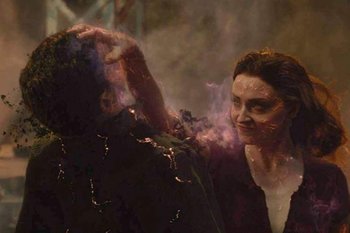 Never mess with the Phoenix... or you'll be nothing but ashes.
Advertisement:

Dark Phoenix proves to be far more terrifying than any of its predecessors (even moreso than X-Men: The Last Stand), due to the story involving a murderous force awakening inside one of our beloved X-Men heroines.

The next movie, however, turned out to be even scarier...