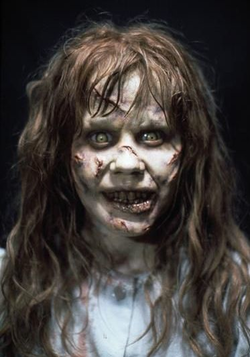 The face of a thousand Screamer Pranks, and for a very good reason.
"Do not watch this movie on drugs unless you've got a mean hankering for PTSD."
— D. McCallum (on Shutter Island note Applicable to many of these examples as well), Cracked
Advertisement:

Do you remember as a kid, you couldn't wait until you were 17 so you could watch R-rated movies without your parents' permission?

For examples from animated movies, see the Animated Films and Anime & Manga pages.

This section is separated by genre and placed in alphabetical order by film. Before you add examples here, check the index above and make sure that movie doesn't already have its own page. Please do not put a movie below because it is "scary in general"; provide specific examples of why it is Nightmare Fuel or it will be removed.