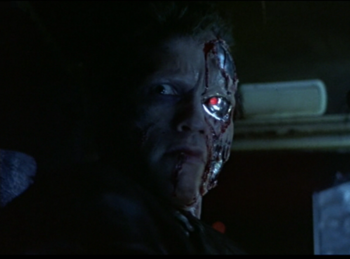 Get out.
"Now listen! And understand. That Terminator is out there! It can't be bargained with, it can't be reasoned with. It doesn't feel pity, or remorse, or fear! And it absolutely will not stop, ever, until you are dead!"
— Kyle Reese

Behold, the very film that propelled James Cameron to stardom, and the one that left millions terrified of homicidal robots and A.I. to this day. Ironically, said movie was inspired by a nightmare of his.