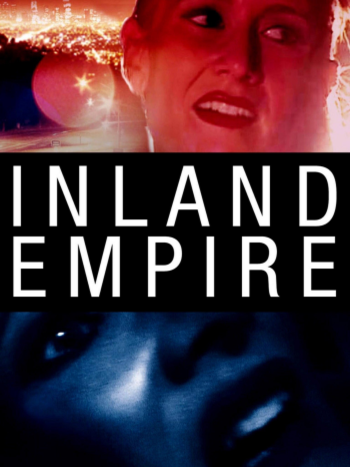 Inland Empire is a experimental thriller film from 2006, written and directed by David Lynch (in what is, as of 2022, his final feature length film).

In Poland, a prostitute and her customer (their faces blurred) talk in a hotel room. In the same room years later, a woman cries and watches a sitcom starring three rabbits. An actress in LA, Nikki Grace (Laura Dern), gets a visit from her neighbor and the next day gets the part in a movie, On High In Blue Tomorrows, which turns out to be a remake of a Polish film based on a Polish folk tale 47 where the leads were murdered. Nine prostitutes lounge around a house. There's a murder, a mystery, and a woman in trouble.

Possibly Lynch's most incomprehensible and terrifying film since Eraserhead. Its production was unusual: Lynch shot the film in bits and pieces, without a complete screenplay. He would simply hand the actors new pages each day. When asked what it was about, Lynch (who never explains his films) simply quoted from the Aitareya Upanishad: "We are like the spider. We weave our life and then move along in it. We are like the dreamer who dreams and then lives in the dream. This is true for the entire universe."

In 2022 the film was restored by Janus Films, supervised by Lynch, and released in select theaters that April.