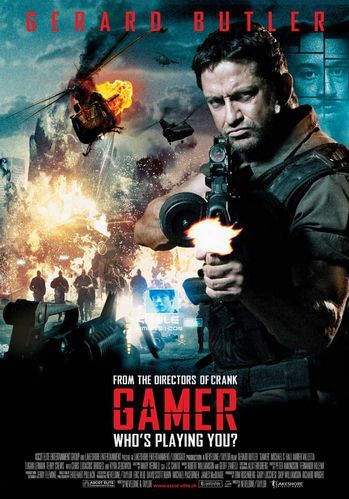 Gerard Butler is going to shoot you before you can shoot him.
Advertisement:

Gamer is a 2009 sci-fi/action film written and directed by Mark Neveldine and Brian Taylor, starring Gerard Butler as John "Kable" Tillman, a death row inmate who is forced to battle against other prisoners in an "online game" (not really online...) called Slayers (no relation to the light novel/anime), with their every move controlled by a young gamer's remote device. If they survive 30 matches, they get a full pardon.

To the players, Kable and the other inmates are just simulated characters. But to a resistance group that opposes the game's now-billionaire inventor Ken Castle (Michael C. Hall), Kable, who has just survived his record-setting 27th match, is a critical piece of their plan to end the sinister inventor's form of high-tech slavery.