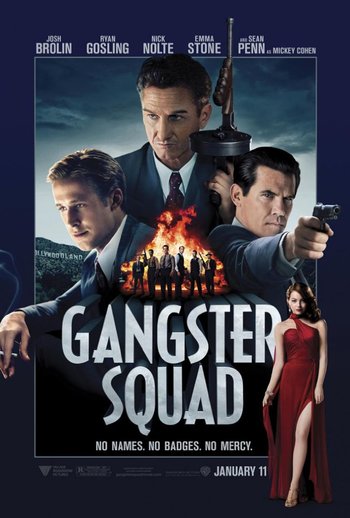 Gangster Squad is a 2013 crime thriller directed by Ruben Fleischer, which follows a group of detectives in the LAPD who fight against the West Coast Mafia, led by notorious gangster Mickey Cohen, in 1949.

Mickey Cohen (Sean Penn) is a former boxer-turned-gangster who maintains an iron grip on Los Angeles, and runs a series of prostitution and drug rackets that have the city locked in a sea of corruption. After busting one of Cohen's men when he attempts to rape a young woman, Sgt. John O'Mara (Josh Brolin) is approached by the LAPD's Chief of Police, Bill Parker (Nick Nolte), to create a special squad that will take down Cohen's empire by any means necessary. To that end, O'Mara recruits a group of five men to help him, including patrolman Coleman Harris (Anthony Mackie), gunslinger Max Kennard (Robert Patrick), wiretapping expert Conway Keeler (Giovanni Ribisi), new recruit Navidad Ramírez (Michael Peña) and Sgt. Jerry Wooters (Ryan Gosling).

As the team begins to take out more and more of Cohen's establishments, the gangster steps up his search for them and declares an all-out war on the squad. Complicating matters is Wooters' burgeoning relationship with Grace Faraday (Emma Stone), who is Cohen's girlfriend. The conflict eventually leads into a final confrontation, with the very soul of Los Angeles at stake.

The film is a Genre Throwback to the Film Noir movies of the 1940's and 50's, and was released in January 2013. A key sequence involving a group of mobsters shooting through a screen in a movie theater was reshot due to the film's proximity to the 2012 Aurora, Colorado movie theater shooting.