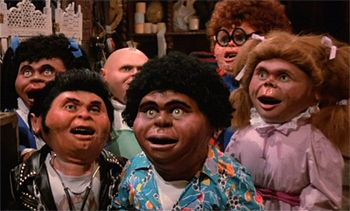 The Mount Rushmore of ugly. note  (Clockwise from bottom-right: Messy Tessie, Windy Winston, Greaser Greg, Valerie Vomit, Foul Phil, and Nat Nerd)
"Out of the garbage pail and into your heart!"
—Tagline
Advertisement:

Dodger, a fifteen-year-old kid, works at an antique shop owned by the wizard Captain Manzini. While working there, four bullies stop by and wreck the place, leaving Dodger in the sewer. He is later rescued by The Garbage Pail kids, a group of misfit children that love to break the rules and be disgusting. They were released from a garbage pail owned by Manzini and much to his chagrin, they refuse to go back.

As Dodger gets to know the kids, he finds out they know how to sew clothes and uses their talents to impress Tangerine, one of the female bullies. Unfortunately, before Dodger can hit it off with her, the kids are captured by The State Home for the Ugly, an institution that incarcerates anybody considered too ugly for society. Dodger and Manzini decide to infiltrate the prison and save the kids from being euthanized.

The film's box office reception was abysmal, earning one and half million dollars while the film cost one million to make. It received three Razzie nominations the year it was released.

This film provides examples for the following tropes: