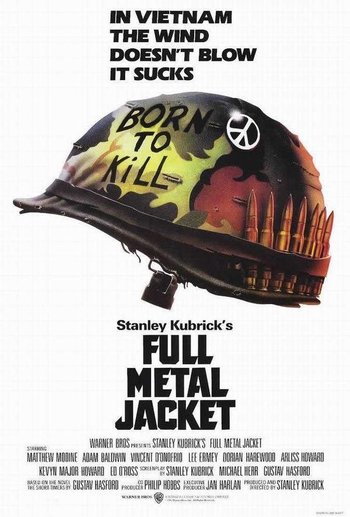 Goodbye, my sweetheart. Hello, Vietnam...
"These are great days we're living, bros. We are jolly green giants, walking the earth with guns. These people we wasted here today are the finest human beings we will ever know. After we rotate back to the world, we're gonna miss not having anyone around that's worth shooting." - Sergeant "Animal Mother"
Advertisement:

Full Metal Jacket (1987) is the story of The Vietnam War as seen through the eyes of a U.S. Marine named J.T. Davis, known to the audience as "Joker."

The film, directed by Stanley Kubrick, is split into two parts. The first part follows James T. "Joker" Davis (Matthew Modine) alongside his fellow Marine recruits through boot camp as they suffer under the colorful Gunnery Sergeant Hartman (R. Lee Ermey), who causes the platoon's Butt-Monkey Leonard "Gomer Pyle" Lawrence to suffer a frightening mental breakdown. The second part follows Joker's struggle to keep his humanity while he covers the Vietnam War as a combat correspondent and is sent to assist a squad in Phu Bai during the Battle of Huế in the Tet Offensive of 1968.

The film is based on the semi-autobiographical novel The Short-Timers by former Marine Gustav Hasford, published in 1979. However, the script was co-written by Micheal Herr, who incorporated a large amount of his Gonzo Journalism book "Dispatches from the Vietnam War". The result is an odd fusion; the plot is drawn from The Short-Timers, with the first half an extremely faithful adaptation and the second half an amalgamation of events from the second and third stories, while almost all the film's iconic dialogue and surreal moments are taken word-for-word from Dispatches.

The title refers to the type of ammunition used by military rifles. A full metal jacket is a copper coating on the outside of a bullet that prevents it from deforming or breaking apart on impact (as well as keeping it from slowly filling the rifling with lead), as is required per the Hague Convention. According to the highest moral authority on the planet, it is acceptable to shoot people with these bullets (as opposed to bullets which are designed to deform or splinter when they hit their targets, such as the hollow point or Dum-Dum round, which generally makes for a much nastier wound). This is referred to at the end of the first half of the story.

This is the only major Vietnam War film that focuses on urban warfare rather than the jungle.

Definitely not to be confused with Fullmetal Alchemist or Full Metal Panic! note  Though the spin-off of the latter, Full Metal Panic? Fumoffu does make references to this film.

"These are my tropes! There are many like them, but these ones are mine!"

"My thoughts drift back to erect-nipple wet dreams about Mary Jane Rottencrotch and the Great Homecoming Fuck Fantasy. I am so happy that I am alive, in one piece, and short. I'm in a world of shit... yes. But I am alive. And I am not afraid."
Feedback