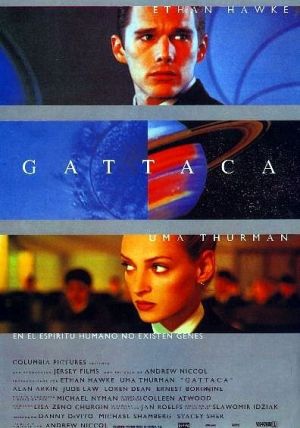 There's no gene for the human spirit.
"Consider God's handiwork; who can straighten what He hath made crooked?"
— Ecclesiastes 7:13
"I not only think that we will tamper with Mother Nature, I think Mother wants us to."
— Willard Gaylin
Advertisement:

Gattaca is a 1997 Science Fiction film by Andrew Niccol which presents a society driven by genetic engineering.

The story centers on Vincent Freeman (Ethan Hawke), who was born naturally but has a younger brother who was optimized. Vincent has poor eyesight and a heart defect, but wants to work on the space program at the eponymous agency. He joins forces with Jerome Eugene Morrow (Jude Law), who has perfect genes but was crippled after being struck by a car. Using contact lenses and copious amounts of Eugene's hair and blood while being careful not to lose a trace of his own genetic material, Vincent manages to pass himself off as a Valid and get a job at Gattaca, where he succeeds by hard work and determination despite his inferior genes.

However, a week before Vincent is scheduled to leave Earth on a mission to Saturn's moon Titan, the Mission Director is murdered in his office and one of Vincent's In-Valid eyelashes is found on the scene. He must now avoid being discovered despite intense police scrutiny and his progressing relationship with his Love Interest Irene Cassini (Uma Thurman), while discovering who the real killer is.