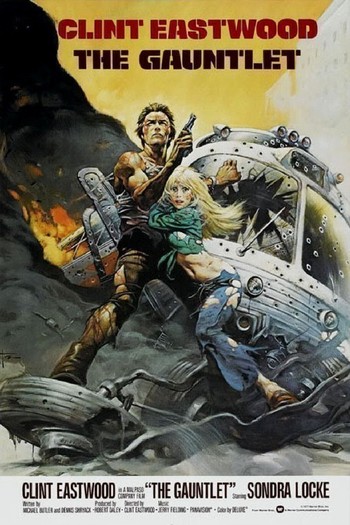 Clint Eastwood's Deconstruction of his own Cowboy Cop image, released in 1977.

Ben Shockley (Eastwood) is a Phoenix cop whose dream of hitting "the big case" has been ruined by a few too many glasses of Jack Daniels. Which, of course, means that he's the one being chosen to escort a prostitute named Augustina "Gus" Mally (Sondra Locke) across state lines to a "nothing" trial at which she is to testify. However, Mally is convinced that Shockley was only sent so they could get rid of him, and, after a few incidents involving a racehorse bet and the destruction of Mally's own house (with them in it), Shockley learns that Mally not only has mob ties, but also has incriminating evidence against a high figure in Phoenix society. And this figure has employed Shockley's own boss, the corrupt Commissioner Blakelock (William Prince), to ensure that neither of them return to Phoenix.

Compare 16 Blocks, in which Bruce Willis must also escort a witness to trial while struggling against Dirty Cops.