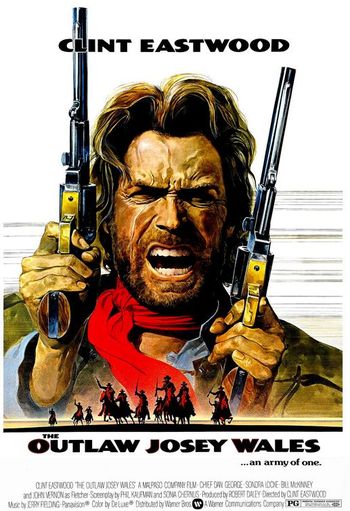 "Now remember, when things look bad and it looks like you're not gonna make it, then you gotta get mean. I mean plumb, mad-dog mean. 'Cause if you lose your head and you give up then you neither live nor win. That's just the way it is."
— Josey Wales
Advertisement:

A 1976 Western film directed by (and starring) Clint Eastwood.

Set during the aftermath of The American Civil War, the film follows its title character, a man whose whole family was killed, leading him to join a group of Confederate guerrillas to track down the killers. After eventually being sold out, however, he is on the run from bounty hunters and Yankee soldiers (including the group who killed his family). Along the way, while racking up a prodigious body count, Wales meets a group of people whom he reluctantly allows to join him. Hilarity Ensues. And by "hilarity," we mean "murder." This is a Clint Eastwood movie, after all.

Based on the novel Gone to Texas: The Rebel Outlaw Josey Wales, by Forrest Carter. The original printing of the book was less than one hundred copies, but one of those copies happened to be sent to Eastwood.

The movie received a Direct to Video sequel in 1986, The Return of Josey Wales, starring Michael Parks as Josey Wales instead of Eastwood, with Parks also taking over as director. It was based on the second Wales book, The Vengeance Trail of Josey Wales, which Eastwood had planned to adapt, but wasn't able to.

Well, are you gonna list those tropes or whistle Dixie?