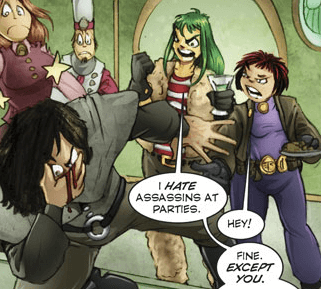 A character makes a derogatory statement about a group of people, then realizes that their statement includes either one of their friends or themself, and qualifies the statement with "Present company excluded." A variation on the Verbal Backspace.

This is often used in passing as a throw-away gag, although occasionally more conflict might stem from it; the character it was unintentionally aimed at might still be insulted (especially if the prejudice was a long-running thing), or if the sub-text seems to suggest that the speaker really did mean to offend. Often, though, the character won't seem to mind.

Red Mage then waits an hour for the Thief to say it.