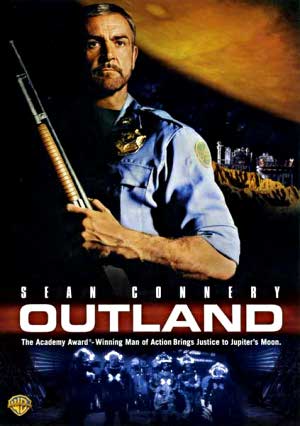 Outland is a 1981 Space Western film written and directed by Peter Hyams, starring Sean Connery, Frances Sternhagen, Peter Boyle and James B. Sikking, and set in a mining colony on Io, one of The Moons of Jupiter. Essentially the plot is High Noon, but this time, in space!

The film's hero, Federal Marshal W.T. O'Niel (Connery), is assigned to a one-year tour of duty in Con Am 27, a titanium ore mining outpost on Io. O'Niel investigates a series of violent deaths among the miners, which have been dismissed as accidents or suicides by corrupt mine management, cynical police and indifferent medical staff. He discovers that the dead miners have been using an amphetamine called Polydichloric Euthimal which enormously increases their work output, but eventually causes psychotic behaviour that leads to their deaths in the dangerous mining environment.

O'Niel tracks down and arrests one drug dealer, and follows the trail to Sheppard (Boyle), the administrator of the outpost, who is complicit in the drug-dealing. Sheppard has bribed O'Niel's deputy Montone to turn a blind eye, and it quickly becomes clear to O'Niel that he cannot rely on any of his fellow officers. Even his wife, frustrated that he considers his duty more important than his family, abandons him, leaving a message pleading with him to return with her to Earth.

Undeterred, O'Niel intercepts and destroys a large shipment of drugs. He confronts Sheppard, who asks him why he bothered when nobody else wants the drug shipments stopped, because they make the workers happy, so production is up, so the corporate owners are happy, so Sheppard is happy. O'Niel vows to expose the entire scheme, and Sheppard notifies his contact on the space station who sends two off-world hit-men to murder him.

Sheppard puts out the word that the killers are due to arrive on the next shuttle. As the time to landing counts down, O'Niel's corrupt deputies desert him, and his attempts to recruit help from the mining station staff are met with contemptuous rejection. In the end, only the outpost's medical officer Dr. Lazarus (Sternhagen) helps him in a desperate kill-or-be-killed hunt through the colony.

Unrelated to Berke Breathed's successor to Bloom County. Or to the 2011 Metroidvania-lite Outland. None of these are also related to the 2012 Australian TV series.

Outland contains examples of many tropes, including: