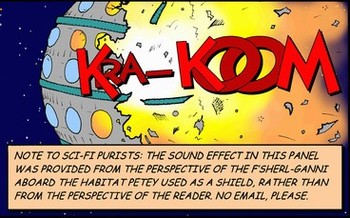 "In space, loud sounds, like explosions, are even louder because there is no air to get in the way."
— #3 - Law of Sonic Amplification from The Laws of Anime
Advertisement:

Whenever a satellite or space vessel of any kind is shown, there will be either a beeping in time with one of the lights (for satellites) or the sound of the engines, which is usually a low rumble. Whenever weapons are fired, there will be an accompanying sound, especially with "laser" weapons (which do not produce any kind of sound anyway, "PEW PEW PEW!"). Explosion will be clearly audible. An Earth-Shattering Kaboom is sure to make a terrible, ghastly noise. This is mostly due to The Coconut Effect, but can sometimes be taken to extremes. One particularly strange case, combining it with Batman Can Breathe in Space, is having characters talk to each other in space.

Only rarely will characters who find themselves outside of the ship use the one way to talk to somebody in a vacuum without radio, going up to them and touching their helmets together, allowing the vibrations to transmit directly.

Acoustic License prevails. It is standard cinematic convention that sound is subjective. You hear what the characters are hearing. Since the ship can hear itself, and there is nothing else in the scene, it is natural to include audio from the ship's point of view. Deleting audio would only be correct if a character was somewhere able to see, but not hear, the ship. Another more 'technical' explanation has more to do with the rules of television production: a silent space battle is somewhere between incredibly boring and incredibly unsettling, and unlikely to attract viewers that have just tuned in or may even turn viewers off simply because our brains are telling us we should be hearing sound even if there is nothing to hear.

The best justification so far actually links into the above in "auralization", where a ship creates sound effects as part of an In-Universe Viewer-Friendly Interface for its crew. If we can have 3D positional sound with home acoustic systems, why should spaceships not have audio representations of events to complement visuals? Also, the sound of explosions could be justified by assuming that the radio equipment is destroyed last and transmits the sound of the explosion to the other ships.

Of course Tropes Are Tools, and this is Artistic License. Having the sound makes the scene more accessible to the Lowest Common Denominator without having to stop to have the characters get a science lesson, plus — it's usually cool.

In Real Life, the inside of a spaceship is often noisier than the same machinery would be on the ground, because sound tends to echo a lot with nowhere to go. That said, while sound may not travel well, pressure waves do (because they're the result of matter, however scarce, interacting with each other) and so depending on how you define sound, things in space can produce a sort of 'noise'.

This is a subtrope of Artistic License – Space.

After the Tamagotchi Planet finally lets out a call to wake Blackholetchi up, he proceeds to pull Tanpopo and Mametchi out; he's really a nice Tamagotchi who wouldn't hurt anybody.

Alternative Title(s): Sound In Space, In Space Everyone Can Hear You Scream

After the Tamagotchi Planet finally lets out a call to wake Blackholetchi up, he proceeds to pull Tanpopo and Mametchi out; he's really a nice Tamagotchi who wouldn't hurt anybody.