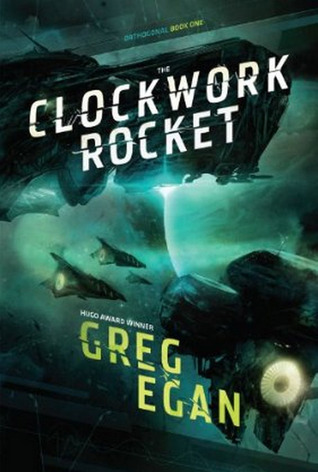 "We need an age, and we don't have it. So we find the time elsewhere. We make a rocket powerful enough to leave the world behind.... When the rocket's history is orthogonal to the history of the world, no time at all passes back home. So for the travelers, the journey can last as long as it needs to. If they require more time to complete their task, they can prolong the flight for another era, another age; it won't delay their return by one flicker."
— Eusebio, The Clockwork Rocket
Advertisement:

Orthogonal is set in a universe where a single minus sign, deep in an equation governing the rules of spacetime, has been changed to a plus sign. Through the story, Egan explores the higher-order ramifications that change has on the laws of physics (and, by extension, on nearly every other discipline of science). Light has no universal speed (colors of light with shorter wavelengths, such as violet, literally travel faster than colors like red, which have longer wavelengths, meaning that distant stars appear as rainbow-colored streaks instead of white specks), and the generation of light creates heat and energy; reverse Time Dilation is in effect; and entropy works more or less backward.

The plot follows a group of Shapeshifting Starfish Aliens faced with an impending apocalypse caused by incredibly destructive Antimatter meteorites. They realize they can't do anything to save themselves with their current technology, so they build a Generation Ship to fly into that alternate dimension, where they will have all the time they need to advance their technology to the point where they will be able to return and Save the World.

In true Greg Egan fashion, the trilogy mostly alternates between chapters that advance the plot and chapters that explore the scientific implications of the One Big Lie that governs the rules of the universe. The latter is mostly accomplished (again, in Egan's signature style) by having a few scientifically-inclined Mr. Expositions bounce Techno Babble off each other.

This Trilogy contains examples of:

Alternative Title(s): The Clockwork Rocket, The Eternal Flame, The Arrows Of Time