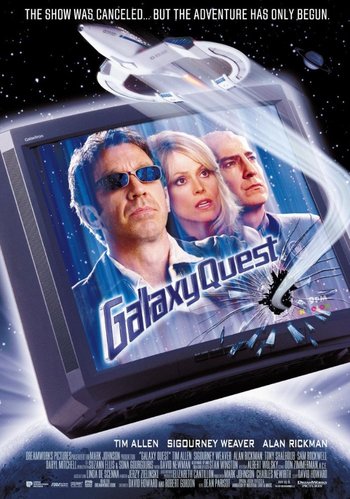 Released in 1999, Galaxy Quest is an Affectionate Parody of the Star Trek franchise, and to a lesser extent of fandom in general. The film was directed by Dean Parisot and written by David Howard and Robert Gordon.

In 1982, Galaxy Quest, a series very much like Star Trek: The Original Series, was cancelled. Eighteen years later, its washed-up stars are fixtures on the fan circuit, though most of them despise the show, its fans, and each other. Only Jason Nesmith (Tim Allen), the egomaniac actor who played The Captain, is still enjoying himself — and the rest of the cast think he's a total jerk (again, very much like the original series).

One day, a hungover Jason is approached by what he believes to be a group of fans who want him to star in an amateur film. However, as he prepares to leave the "set", he finds himself looking out over space and is suddenly slingshotted back to earth, and he realizes that it was all real: he had been abducted by real aliens, and taken to a real spaceship, a perfect copy of the show's Protector, where he'd fought a real space battle.

When the aliens come for his help again since the earlier battle hadn't killed the Big Bad Sarris (Robin Sachs), Jason convinces the rest of the cast to come with him. It's soon explained that the aliens, called Thermians, received transmissions of the Galaxy Quest show out in space and thought they were "historical documents" of actual adventures the crew has been on; they've since restructured their entire society to emulate the show and its technology and values. With the cast now acting out their parts for real, they set out to defeat the enemy of the Thermians, Sarris, and get back home in one piece. The story hangs lampshades on most of its tropes.

The film's story was continued in the IDW series, Galaxy Quest: Global Warning! and Galaxy Quest: The Journey Continues. There were plans to make a film sequel, but they were cancelled after the death of Alan Rickman, who played Sir Alexander Dane. A series in development for Amazon was paused for the same reason, but resumed in August 2017 with Paul Scheer assisting. In 2019, Screen Junkies released a documentary titled Never Surrender about the creation of the film, with interviews from the cast and crew.

Jason and Alexander trick two mooks by re-enacting a conflict scene from episode 17 of the Galaxy Quest show.

Jason and Alexander trick two mooks by re-enacting a conflict scene from episode 17 of the Galaxy Quest show.