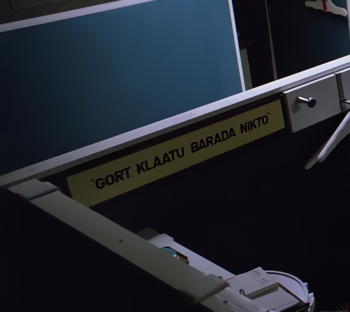 In the classic 1951 sci-fi film The Day the Earth Stood Still, the alien Klaatu arrives on Earth with his robot companion Gort and a message for the world's leaders. His welcome on arrival is less than warm. Anticipating that things could go very wrong, Klaatu teaches a human woman the phrase "Klaatu barada nikto," and tells her to use it should anything happen to him. It's later used to shut down Gort's rampage.

Since then, Klaatu Barada Nikto has become a common sci-fi catchphrase. It's been referenced in all manner of media, even outside sci-fi — fantasy, comic books, music, whatever. Although there's no known translation for the phrase, it's safe to assume that "Klaatu" refers to the film's protagonist.

Despite its status as a classic sci-fi reference, and despite Keanu Reeves' insistence on its presence, when it came time for The Remake, the phrase was deliberately rendered almost unintelligible.