Take a Moment to Catch Your Death 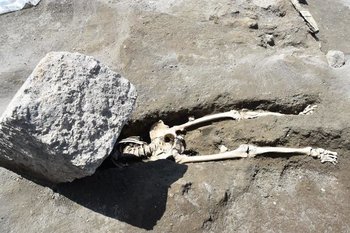 The skeleton of a man who escaped the initial eruption of Mount Vesuvius in Pompeii, only to get smashed to bits by a boulder launched by the volcano after just making it to a safe distance.note Later developments suggested that he had in fact asphyxiated by this point.
"Near-Death Experience Followed By Right-On-The-Money Death Experience"
— The Onion

This happens after the character or characters narrowly escape some kind of disaster. The bomb is defused with one second left. The Booby Trap is jammed. The bad guy is buried under a ton of rubble. Whew. It's finally ov—OH GOD, THE HORROR! Death claims a victim suddenly and often quite violently. The key to this trope is that someone believes that everything is okay, and in that moment of relaxation, when the tense music has stopped, someone dies.

To clarify, this does NOT refer to just any sudden, shocking death. The death in question must immediately follow an escape from imminent peril, interrupting the peaceful tranquility of apparent success. However, the cause of death need not be the exact thing that was perilizing the heroes in the first place. They could be blindsided by a completely new threat or an older one about which they'd forgotten. Or a wound could suddenly catch up to them — aversions of Hard Head often produce this. If the incident doesn't take place immediately after and has a totally separate cause, see Cheated Death, Died Anyway.

This is often a Jump Scare. Except when it's supposed to be darkly ironic. The Beat is a distant comedic relative.

Can possibly be combined with a Finger-Twitching Revival or Eye Awaken if it involves a bad guy Playing Possum.

The Video Game variant of this is Kaizo Trap when during a seemingly moment of peace the player will be killed if not ready.

Related to Hope Spot, may be preceded by a Cat Scare, and has been known to involve Not Quite Saved Enough and Diabolus ex Machina. This is the kind that definitely ends in death. If a character collapses and faces the serious danger of death, see After-Action Healing Drama. The cruelty factor goes up if immediately preceded by Cathartic Exhalation.

THIS IS A DEATH TROPE: Beware unmarked spoilers!!

Alternative Title(s): Whew That Was BOOM, Death By Sigh Of Relief