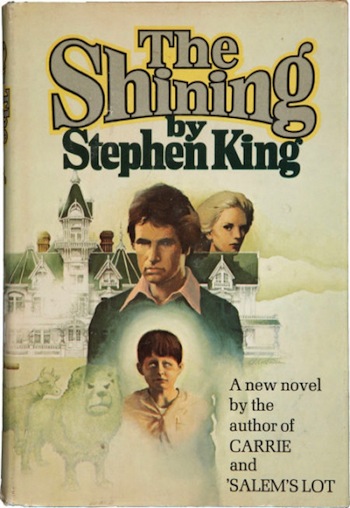 A 1977 horror novel by Stephen King. His third published novel, it was his first to become a bestseller as a hardcover, and established King as a preeminent author in the horror genre.

Jack Torrance has taken a job as winter caretaker of the illustrious Overlook Hotel in the Rocky Mountains, during the months when it snows too much for guests to visit. In spite of the hotel's grisly backstory, Jack really needs this job; after having lost his teaching position for assaulting a student, finances are tight and his already-strained marriage is on the rocks. His wife Wendy, who still remembers when Jack broke their son Danny's arm after getting drunk one night and trying to spank him, has been contemplating getting a divorce. Five-year-old Danny, meanwhile, has been experiencing strange visions and keeps knowing things he shouldn't know.

But Jack is optimistic, and a little desperate, for this new job to work out. The isolation will give his marriage a chance to mend and give him time to write that play he's always wanted to write. Too bad the hotel has other plans for him and his family.

In 1980, it was loosely adapted into a feature film directed by Stanley Kubrick and starring Jack Nicholson. Though quite different from the original, the film has become a classic in its own right. Still, Stephen King was irritated at the changes (while remaining lukewarm-to-positive about the film overall), and it was more faithfully remade as a 1997 miniseries starring Steven Weber and Rebecca De Mornay. It was met with overwhelmingly positive critical reception upon release, but has become increasingly scrutinized over the years (partly for perhaps being too faithful to the source material) and is nowadays regarded by both fans and critics as being inferior to the 1980 film.

King released a sequel titled Doctor Sleep in late 2013, and Mike Flanagan adapted the novel to film in 2019. It stars Ewan McGregor as the now-grown Danny Torrance and represents something of an attempt to synthesize the original Shining novel, the Kubrick film adaptation and Doctor Sleep.