Literature / The Masque of the Red Death 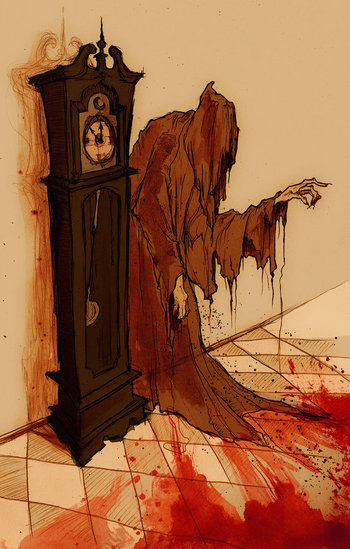 And now was acknowledged the presence of the Red Death. He had come like a thief in the night. note  Art by Abigail Larson.
The "Red Death" had long devastated the country. No pestilence had ever been so fatal, or so hideous. Blood was its Avatar and its seal—the redness and the horror of blood. There were sharp pains, and sudden dizziness, and then profuse bleeding at the pores, with dissolution. The scarlet stains upon the body and especially upon the face of the victim, were the pest ban which shut him out from the aid and from the sympathy of his fellow-men. And the whole seizure, progress and termination of the disease, were the incidents of half an hour.
— Opening Paragraph
Advertisement:

"The Masque of the Red Death" is one of Edgar Allan Poe's most famous short stories, first appearing in Graham's Magazine in May 1842 as "The Mask of the Red Death". Poe rewrote and revised the tale before publication in Broadway Journal in July 1845 with its now-familiar title.

Prince Prospero's home country isn't doing too well. A horrible plague called the Red Death is ravaging the countryside. The onset of the disease is marked by massive bleeding from the pores, especially the face, followed by death within an hour.

Not wanting to be troubled by the sight of dying peasants, Prospero sequesters himself and several hundred of his closest friends inside one of his secluded abbeys. Well stocked and with lots of entertainment, they plan to ride out the plague in style.

One night, Prospero decides to hold a masquerade ball in a procession of differently colored rooms. The final room is black and has a large clock in it. Just at midnight, the guests notice a strange figure among them, costumed like a corpse who has died of the Red Death. Outraged at this show of poor taste, Prospero chases the figure into the final room — and promptly drops dead. The frightened and angry revelers strip off the figure's costume to find nothing underneath it at all...except the Red Death, now in their very midst. Then everyone dies. When the last guest expires, the clock stops, the lights go out, and "Darkness and Decay and the Red Death held illimitable dominion over all."

On the surface it appears to be a relatively simple, straightforward story compared to the heavy likes of The Fall of the House of Usher and "The Pit and the Pendulum". However, close reading of the text reveals a story chock-full of symbolism and thoughts on the nature of death and life.

Sounds like a regular trip down Poe avenue, no?

And darkness and decay and the Red Tropes held illimitable dominion over all.