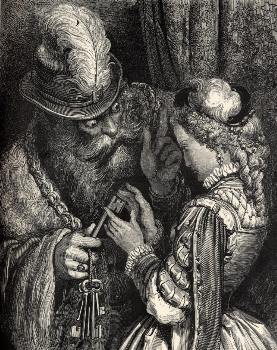 "At first she saw nothing, for the windows were closed, but after a few moments she perceived dimly that the floor was entirely covered with clotted blood, and that in this there were reflected the dead bodies of several women that hung along the walls. These were all the wives of Bluebeard, whose throats he had cut, one after the other."
— "Bluebeard"
Advertisement:

) written as La Barbe Bleue ("The Blue Beard") by Charles Perrault in 1697, which later found its way into the Grimms' first edition of 1812 as König Blaubart or "King Bluebeard" (Online version here

). (In various versions of the fairy tale the eponymous man is a king, sometimes a knight or other rich person.) The story starts with a rich gentleman, who is a widower, asking for the hand of a fair young maiden in marriage. After the wedding, he gives her a key-ring with the keys to all the doors of his mansion (or palace), with the request that if she loves him she must never, ever, ever use the golden key to open a certain door in the house.

Then he leaves the house on business, sometimes for days at a time, and the woman gets bored and eaten up with curiosity about the door she is not supposed to open, so finally she goes and opens it. (In some versions Bluebeard merely points out the key as forbidden, and the woman tries the key in all the doors of the house until she finds the right chamber.) When she opens the door, she finds the blood-spattered dead bodies of all the former wives of Bluebeard who he murdered for their money. She flees in horror and tries to act as if nothing happened, but when Bluebeard returns he invariably finds out what she has done, one way or the other (sometimes by finding traces of blood on her shoes or the key she dropped in fright), and threatens to kill her, too, for betraying his trust. Depending on the version of the tale, she is saved by the arrival of her relatives who kill Bluebeard, or, after having been locked up, manages to flee and alert the authorities.

A second Grimm variant, "Fitcher's Bird", indicates that the woman was only wrong insofar as she got caught. The heroine in "Fitcher's Bird" also "betrays his trust" to find the bodies of her sisters, but does so in a manner that he cannot detect, and therefore ultimately comes out on top.

An English version of the story, "Mr. Fox", has the heroine witness the villain murdering a previous bride, and confronting him at the wedding breakfast with the severed hand of the unfortunate lady. Shakespeare, in Much Ado About Nothing, makes a reference to the recurrent rhyme in this version:

For it is not so, and it was not so,
And God forbid that it should be so!

This story has given name to a specific kind of Serial Killer, "The Bluebeard," who kills a succession of wives.

Despite what Bart Simpson may tell you, the titular character is not a pirate.

Adaptations of the tale or appearances of the character in other works: