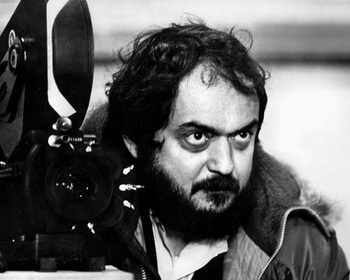 This man cares about his work. His eyes say so.
"When I made my first film, I think the thing [that] probably helped me the most was that it was such an unusual thing to do in the early '50s for someone to actually go and make a film. People thought it was impossible. It really is terribly easy. All anybody needs is a camera, a tape recorder, and some imagination."
— From an interview with East Village Eye in 1968
Advertisement:

Stanley Kubrick (July 26, 1928 – March 7, 1999) was an American film director and screenwriter, known for creating some of the most important, controversial, and stylistically distinctive films of the second half of the 20th century.

Born to a middle-class Jewish family in New York City, Kubrick was a college dropout (albeit one who was also a voracious reader and autodidact). From an early age, he was a cinephile who was especially fond of foreign films and arthouse film-makers such as Josef von Sternberg and especially Max Ophuls (who he cited as his favorite, and his biggest influence).

The Fall of the Studio System began when the Supreme Court ruled in favor of an antitrust suit that broke up the monopoly of film distribution formerly held by major studios, and an indirect effect of this was the nurturing of independent theaters, and by extension, independent cinema. Kubrick could make documentary newsreels and find a way to distribute it without having to cross many hurdles, and he quickly taught himself the nuts-and-bolts of film-making without dealing with the studio system, cultivating an independent sensibility that he carried with him to the end of his life.

His early films, Fear and Desirenote Which Kubrick has shelved because he was dissatisfied with it and Killer's Kiss were made entirely on his own, and Kubrick on his first feature served as not only his own director, but his own cinematographer, editor and sound-man, which provided him a thorough technical knowledge of film-making. The Killing proved to be his first success, and with that film, produced by associate James B. Harris, Kubrick found a foot in Hollywood, and he attracted the attention of Kirk Douglas who partnered with him to make Paths of Glory which became his Breakthrough Hit, earning him respect and good notices from America and England. The interim period between that film and Lolita (his first film made in self-imposed exile in England) featured a period of striving in the Hollywood system, including an attempt to collaborate with Marlon Brando on One-Eyed Jacks and Spartacus, produced by Kirk Douglas, who brought Kubrick in after firing original director Anthony Mann. Although Spartacus was a major success, Kubrick felt dissatisfied because the project was clearly Douglas' (and screenwriter Dalton Trumbo's) more than his, he didn't feel personally invested in the subject and was generally too independent-minded to do journeyman work. He resolved to maintain his independence against all odds. He went to England to make Lolita and never returned to America, citing a fear of flyingnote Which biographer Bill Krohn believes is a rather convenient excuse. He notes that during the making of Lolita, Kubrick shuttled back and forth between England and America to shoot the footage for the exteriors, which he did not delegate to second-unit.

In England, Kubrick was able to cultivate a sense of mystery and excitement about his work. At a remote distance from Hollywood, he was able to assert control over all aspects of film-making from pre-production to editing and sound-mixing, from advertising to exhibitionnote No, seriously; Kubrick would appoint staffers to go to different theaters across America and England, and if he received reports and complaints that a projectionist was screening his film in the wrong aspect-ratio, or if the theatre had bad lighting, he would personally call the projector during the screening and tell the man how to screen it correctly. He was able to do this thanks to support from excellent producers such as James B. Harris and Jan Harlan (who was also his brother-in-law) and the fact that his films were, relatively speaking, less expensive than other Hollywood super-productions of the time, and they were generally successful at the box-office.

During this time, Kubrick also became, so to speak, a Reclusive Artist. He would give interviews as per his convenience and would be inaccessible to journalists and celebrity gossip-columnists and generally interact only with his collaborators and producers. As such, a number of legends cropped up about him.

People he had worked with have described him as acidic to others but amazingly fond of animals, particularly cats, and very close to his wife and children. Actors who worked on his films described him as manipulative, distant and aloof. Malcolm McDowell thoroughly enjoyed working with him on A Clockwork Orange, but was snubbed after shooting was complete. Others, such as Ryan O'Neal, Jack Nicholson, Tom Cruise and R. Lee Ermey, however, enjoyed working with him and described him fondly.note On average, however, his relationships could be defined by the making of Dr. Strangelove; actors that did exactly as he said walked away with their paychecks (unless they were named Peter Sellers or R. Lee Ermey, who got to do a surprising amount of Improv). Slim Pickens was never told he was making a comedy, implying that his character was the hero of the film, heroically delivering the bomb that ends the world. Pickens was okay with it in the long run, spinning the publicity into a highly successful career. On the other hand, George C. Scott wanted to play General Turgidson as a dignified Well-Intentioned Extremist, so Kubrick tricked him by assuring him that the cameras were off, and that Kubrick and the rest of the cast and crew are the only ones seeing him. He proceeded to use those takes, leading to Scott swearing to not work with Kubrick again. In other cases, most notably his treatment of Shelley Duvall on the set of The Shining, his behavior went beyond controlling and became abusive, to the point of what some even describe as psychological torture.note In short, forcing her to work 12-hour days for over a year, isolating her and constantly yelling at her, forcing dozens of takes no matter how minor the scene, including 127 takes of the exhausting baseball bat scene. Duvall at the time came to Kubrick with clumps of hair that had fallen out of her head due to stress, and the experience may have contributed to the detachment from reality and intense mental illness that she has suffered from later in life, though she has denied it being the case.

Because of his high artistic ambitions (he was obsessed with originality and doing things that had never been done before), his insistence on personally researching each aspect of pre-production (a side-effect of his autodidact originsnote For Barry Lyndon, Kubrick would personally scour countless paintings to create reference material for the film's look, costume and production designer, work that other film-makers — including great directors — would properly delegate to others but which he felt he had to do himself) and his insistence on doing a film that interests him thoroughly, his production pace slowed down drastically. He made four films in The '60s and five films in the next three decades, much of his time spent on pre-production for unmade projects such as a planned Biopic on Napoléon Bonaparte, a film on The Holocaust, and a science-fiction project about an android. The former two he abandoned because he felt he had been beaten to the punchnote By Sergei Bondarchuk's adaptation of Waterloo in The '70s and Schindler's List by Spielberg in The '90s. The latter project was subsequently completed after his death by Steven Spielberg as A.I.: Artificial Intelligence as per Kubrick's suggestion.

Yet despite this seeming procrastination, Kubrick was still able to more or less make a film as per he pleased as evidenced by A Clockwork Orange, Barry Lyndon, The Shining, Full Metal Jacket and much later Eyes Wide Shut. During his lifetime, virtually all his films were met with a polarizing reception by critics and the audience, but most of them were box-office successes. They were shocking and controversial not only in terms of content but for their cold, detached and at-times sardonic tone that somehow made his films feel more European than American, and certainly like nothing in Hollywood.

All of Kubrick's movies were adaptations of literature, both Lit Fic and genre fiction, but they were all subversive of genre and Hollywood conventions, featuring Anti-Hero protagonists, violence and disturbing sexuality. Their most consistently acclaimed traits, namely their visual design, use of musicnote Kubrick generally didn't like original scores, much to the annoyance of composers who worked with him, and he tended to use samples from classical and modernist music and mix them up with other pieces, blazingly original iconography (his background in photography really shows in his work) and overall bleak view of humanity and institutions made his filmography ripe for Affectionate Parody, Pop-Cultural Osmosis and cult appeal.

In short, he's a filmmaker no one is going to stop talking about any time soon.

on Wikipedia lacked an infoboxnote those boxes usually found on the top of "traditional" wikis that are like mini CliffsNotes about the subject of an article for twenty years; there was quite

a debate over it

His movies provide examples of:

References to Kubrick in popular culture