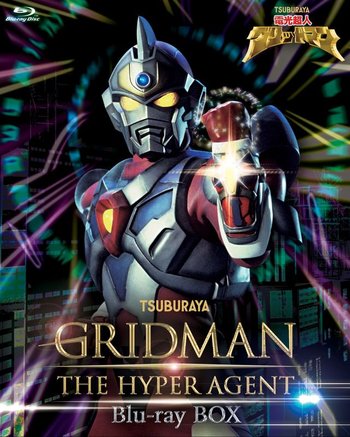 Denkou Choujin Gridman (電光超人グリッドマン, "Electric Superhuman Gridman" or "Gridman: The Hyper Agent") is a Japanese toku "Giant Hero" series by Tsuburaya Productions, the producers of Ultraman. The show ran from 1993 to 1994 on Tokyo Broadcasting System, lasting for 39 episodes. It was adapted Power Rangers-style by DiC Entertainment into Superhuman Samurai Syber-Squad. This would be Tsuburaya's last non-Ultra superhero production for more than a decade until Bio Planet WoO in 2006. Most of Gridman's production crew later worked on Ultraman Tiga.

Shot on live video, Gridman was the first Tsuburaya series to use D-2 digital video for its special effects scenes, allowing for smoother slow-motion photography. Tsuburaya, having switched to digital techniques since then, would continue to use D-2 for all future productions.

Schoolmates Naoto Sho, Yuka Inoue, and Ippei Baba use their homebuilt computer "Junk" to program their own video game featuring a superhero, but once connected to the World Wide Web, the hero character becomes possessed by an other dimensional being calling himself Gridman. He informs the children that he is a Hyper Agent, a member of his people's police, and he needs their help in tracking down his dimension's greatest criminal Kahn Digifer, who has plans to wreak havoc on Earth by unleashing powerful computer viruses on the Computer World within the web. Unbeknownst to them, Kahn Digifer has convinced the children's classmate Takeshi Todo to help him in his quest, with Takeshi creating the virus monsters and Kahn Digifer giving them life. To stop them, Naoto fuses with Gridman and fights the virus monsters in the Computer World, while Yuka and Ippei assist him from the physical world by controlling programs they develop on Junk.

After 21 years of inactivity from the property, an animated short starring Gridman was made by Studio TRIGGER for the Japan Animator Expo, released on January 16, 2015. Trigger and Tsuburaya would later collaborate to expand on what they would call the Gridman Universe: starting with the 12-episode series SSSS.GRIDMAN in 2018, this leg of the franchise updates the setting to the modern day, taking place some time after the original series. Another anime, SSSS.DYNɅZENON, would premiere in 2021.