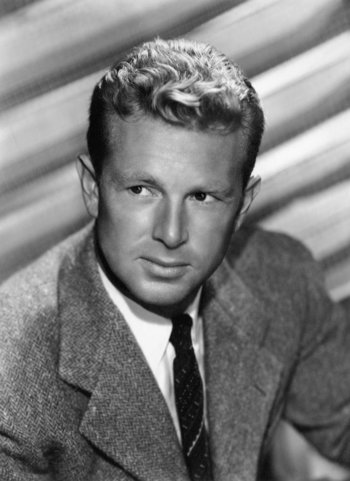 Sterling Walter Hayden (born Sterling Relyea Walter; March 26, 1916 — May 23, 1986) was an American actor who became famous in the post-war era for playing dark anti-heroes and villains in many Film Noir and crime movies. His imposing height (6 feet 5 inches) and incredible intensity made him a powerful screen presence which lent great power to the many characters he played, several of whom struggled to balance their humanity with their violent tendencies and past.

Hayden was born in New Jersey and as a young man he traveled out west and worked in many jobs. He worked for several years as a sailor on large and small vessels. Eventually he even became skipper of his own square rigger at the age of 22. He also found work as a Print Model and eventually Hollywood caught attention and offered him a contract. He made his film debut in 1941. He appeared in only a few titles before he joined the army and served as a sailor and OSS Agent during World War II. He was active in shipping supplies to partisans in Yugoslavia, and even saw action in the Naples-Foggia Campaign in Italy. Hayden rose to the rank of First Lieutenant and won the Silver Star for his services and received a personal commendation from Marshall Josip Broz Tito. During his time in Italy, serving alongside the Partisans, many of whom were communists, Hayden became inspired by their ideology and joined the Communist Party. However, during the Red Scare, he would testify to HUAC to safeguard his career, an action he regretted for the rest of his life but felt was necessary at the time.

His Breakthrough Hit as an actor was John Huston's The Asphalt Jungle which established his familiar persona as a hard-edged troubled anti-hero who was sympathetic but self-destructive. He became a staple of crime films following that, which kept him typecast even though he occasionally appeared in unusual films like Nicholas Ray's Johnny Guitar. Following The Killing, he would appear in another Stanley Kubrick film in his iconic and trope-making role as General Ripper in Dr. Strangelove.

Hayden professed to dislike acting and stated that he used the money to pay for his sailing trips. His personal life was turbulent with two failed marriages. He would make a comeback in The '70s, appearing in notable films by Coppola (Officer McClusky in The Godfather), Altman and Bertolucci, with the latter noting that Hayden was a cult actor in Europe for being a Working-Class Hero in many crime films. He remains one of the most highly regarded character actors in American cinema.

Film roles of Hayden with pages on TV Tropes: