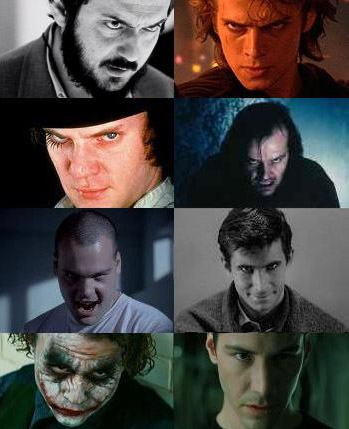 Head down, eyes up.note From left to right, top to bottom: Stanley Kubrick, Darth Vader, Alex DeLarge, Jack Torrance, Pvt. Leonard "Gomer Pyle" Lawrence, Norman Bates, The Joker, and Neo.
"In that showdown, and at several other times in the film, Kubrick indulges his favorite closeup, a shot of a man glowering up at the camera from beneath lowered brows. This was the trademark visual in A Clockwork Orange, and Jack Nicholson practiced it in The Shining. What does it mean? That Kubrick thinks it's an interesting angle from which to shoot the face, I think."
— Roger Ebert, review of Full Metal Jacket
Advertisement:

The Kubrick Stare is really quite simple to pull off. You simply do the following:

It generally signifies that the character in question is either really, really pissed or really, really deranged, and the person they're looking at is really, really screwed. Other times — usually when combined with a smile — it means they're feeling really, really clever (regardless of whether or not they actually are). It's arguably the most easily executed type of Death Glare.

When a show or film utilizes the look, it's often a homage to Stanley Kubrick.

Either way, it's really creepy and ominous. Although depending on the context, it can also be very badass.

If the character in question is normally a Shrinking Violet, this is a sign that said character has just been pushed way too far, and whoever's responsible will almost certainly regret doing so.

Often accompanied by Creepy Shadowed Undereyes, Red Eyes, Take Warning, a Forehead of Doom, a Psychotic Smirk or a Slasher Smile, and also a reveal matched with Scary Shiny Glasses. If a character combines this with Finger-Tenting and/or a Psychotic Smirk, odds are, they're a Magnificent Bastard. Heroic examples often are used for Staring Down Cthulhu. See also: Hidden Eyes, Death Glare, and Disapproving Look. Compare Primal Stance and Limp and Livid.