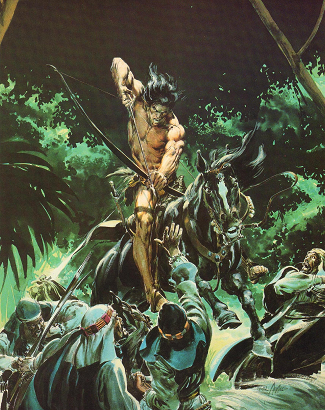 This is a speculative tale that takes place in undiscovered or semidiscovered country in the present or "recent" past (usually no earlier than the early 20th century), supposedly on this Earth, as opposed to, say, a High Fantasy in a Medieval setting, or a Space Opera in a far future-like setting. As the title indicates, it often takes place in a tropical rain forest, though that isn't necessary. The key point is that Willing Suspension of Disbelief is provided primarily by the use of settings that are regarded as exotic, mysterious, dangerous and above all, far away by most readers, yet still on this world, rather than providing a whole imaginary world "in a galaxy far away". A typical setting, for instance, might be Hungry Jungle, Darkest Africa, The Shangri-La or Tropical Island Adventure. There are occasional similarities with Planetary Romance; the two genres can each borrow tropes normally associated with the other, and there is potential for crossovers (aliens can, for instance, kidnap the intrepid explorers, or perhaps a Planetary Romance can have a story take place on a jungle planet). However, some elements of a Jungle Opera can be less flexible than other speculative sub-genres by the nature of operating in "closer proximity" (so to speak) to Real Life.

Jungle Operas tend to feature Bold Explorers, primitive locals (who tend to be very territorial and angry), Precursors, Lost Colonies, Ancient Artifacts, and the like; ruins-filled-with-deathtraps is one of The Oldest Ones in the Book. This will also often involve Ancient Astronauts and have an Adventurer Archaeologist as one or more of the characters. Oddly enough, the experiences of Real Life explorers did sometimes bear a suspicious resemblance to this genre. We don't think that any secrets man was not meant to know have been discovered — not that anyone would admit it if there have been some. Maybe the world is not yet ready?

Often involves a Lost World. In some versions the story is about a quest to find this, and a Lost World is a MacGuffin Location. Also see Two-Fisted Tales, with which this trope usually overlaps.