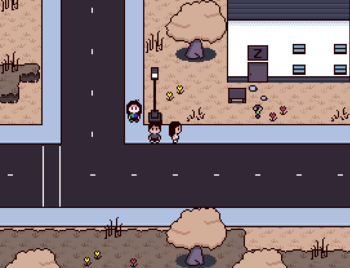 From left to right: Ego, Emmet, and Emma. Not pictured: Ann, Alvin, Azzy, and The Killer.
Ann is just a simple kind of girl who wants to live life to the fullest. She usually accomplishes this by sleeping late at night and then not waking up until the afternoon sun is shining bright. Being the great person she is, all of her friends are excited to see her when she finally wakes up.

However, last night, Ann didn't sleep. Well, she tried. She just… couldn’t. This morning, without getting any sleep at all, she got out of bed way earlier than she normally would.

This, was the first of many, many things to go wrong.

Advertisement:
Annventure is an Earthbound-inspired RPG Maker horror game series created by Yoobii from Game Jolt. It is part of the Yoobiiverse with The Brains And The Brawn, Annabelle (RPG Maker), and Mute.

It stars the titular Ann, a normal girl who lives in Blackwater Country and loves to sleep late. One night, she is unable to sleep and so, in the morning, goes around Nirvana Town to find something to do. She learns that animals near the outskirts are becoming aggressive and a portal has opened up, so she decides to investigate.

Soon, as Ann goes throughout the world to find some sleep, strange things happen around her. A horde of zombies arrive, a mysterious girl by the name of Ego repeatedly confronts Ann, and to make things worse, a Spree Killer begins to wander the towns of Blackwater Country, terrifying everyone. Meanwhile, Emma, best friend of Anna, finds she has her own role to play...

Followed up by Annventure of a Lifetime

, in which the Killer, after seemingly being defeated in the first game, returns with a vengeance, and Ann must once again stop the Killer. But this time, the Killer is being aided by a Mysterious Figure who might have some connection to Ann... and soon, the other worlds in the Yoobiiverse become involved as well as the Killer begins threatening their worlds.

The third game of the Trilogy, ''Annventure to Remember''

, in which Ann travels to an Alternate Universe with a Western theme to find new friends and fights against a demon invasion, was in production and a demo released but was canceled.

In its place, ''An Annventure to End Them All''

, a crossover with the other two series, was made instead to serve as the trilogy's Grand Finale. In it, Rudy, a character from the second game, is called upon as The Chosen One to stop a mysterious force that is eradicating the multiverse and causing everyone to vanish, and to save it he must team up with two girls, each from the other universes. And first, he has to find out who those two girls are...

, starring the titular Ego in her own game. After having driven away her friends with her incredible egoism, she decides to break into her mom's science lab in the Heirloom University of Arts, hoping to find some invention that will help her. She decides to use her mom's cloning machine to make a clone of herself to befriend, but the clone winds up being a malicious entity, The Id, who represents Ego's darkest desires and sets out to get revenge on Ego's friends. Ego must now traverse through the university and stop Id while proving that she needs no one to be the best.

In addition, there is a fan game collection called Annventure Annthology by GameMaster1 that is a trilogy of short side story prequel games. There's also Annventure Nihilism, a Fan Remake of An Annventure To End Them All by Luunii/Enflared that expands the game greatly and creates an entirely different universe that Luunii plans to expand on. The demo and a teaser game are currently out.