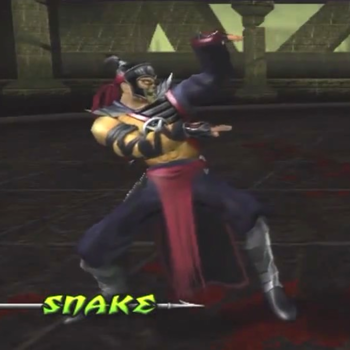 The animal kingdom is host to all manner of vicious and terrifying creatures. It is therefore appropriate that some fighters will base their techniques or fighting styles on animal movements.

In Real Life, there exist several forms of martial arts based on the behavior of animals. The most famous examples are the Five Animal fighting styles

which originated south of China's Yangtze Rniver around the late Ming early Qing Dynasties, as well as the Northern Praying Mantis

In some cases, this can reflect a character's personality. For instance, a person who uses a tiger-based fighting style might be characterized as aggressive and quick to anger while a snake martial artist may be sneaky and untrustworthy. Count on some characters with animal themed fighting styles to have their design reflect their animal as well.

Sub-Trope of Animal Motifs. Can potentially overlap with Animalistic Abilities if the fighting style is a superhuman martial art that also grants animal-like abilities or if the animal-like power allows the opponent to create a fighting style based on the animal source. May also be a result of Raised by Wolves.