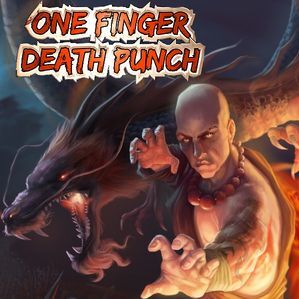 "Simplicity to perfection.
To be played in bursts.
By design, there is no story.
Only crazy kung-fu."
— One Finger Death Punch 2 Intro
Advertisement:

One Finger Death Punch is a deceptively simple Stick Figure Rhythm Game styled after East Asian Martial Arts Movies in the vein of Bruce Lee and Xiao Xiao. You play as a lone martial arts hero fighting off scores of enemies charging him from all sides. The controls boil down to pressing the left and right mouse/controller buttons (not just one of them, as the title would suggest) whenever an enemy comes within striking range left or right, respectively. If that sounds boring, wait until special enemy types and weapons come into play, to speak nothing of special stages...

There is no story to speak of.

The game is made by Silver Dollar Games, an Xbox Live indie developer. It was featured by The Cynical Brit and Extra Credits. Most likely unrelated to the band Five Finger Death Punch. After all, "the title has nothing to do with any bands, just kung-fu".

This game is available on PC, through the Steam platform. It was also available on Xbox 360 until it, along with all other indie games on Xbox Live, got removed in 2017.

One Finger Death Punch 2, was released on PC, Xbox One, Playstation 4, and Nintendo Switch in Spring 2019.