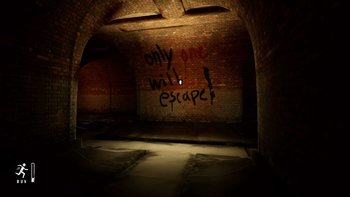 Will it be you?

One Leaves is a Survival Horror game released for Xbox One and Windows in 2019. It was developed by Wahoo Studios and published by Oath Inc.

You find yourself trapped in a freakish environment with three of your friends. An overhead voice informs you that only one of you is going to make it out, so you need to navigate through the maze and solve puzzles before it's too late. Along the way, you'll unwittingly encounter the harmful side effects of smoking tobacco.

If you haven't guessed, the entire game is essentially a Public Service Announcement sponsored by The Real Cost. The concept is taken from a statistic that three out of four teens who use tobacco will be unable to quit. It also serves as a companion piece to their ad campaign

with the same concept.

The game can be downloaded for free on the Microsoft Store.

Three out of four tropers will not escape these tropes: