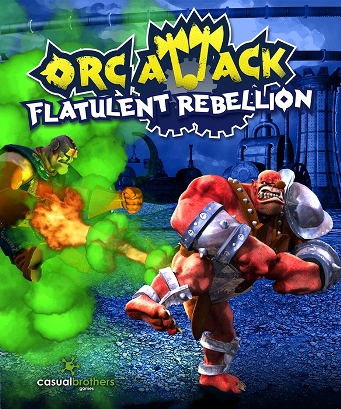 Fartillery at its finest.
Orc Attack: Flatulent Rebellion is a Beat 'em Up video game for the PlayStation 3 and Xbox 360 created by Casual Brothers Games in 2013. Set in medieval times, a community of kind (albeit unhygienic) orcs lived in peace and harmony, until one day, thousands of greedy human beings invaded their land and destroyed the environment, making the land very toxic. As a result, the orcs began to suffer from severe side-effects, one of which included chronic flatulence. Fed up with the humans, the orcs tried to rebel against them, but failed without even having much impact against them. With the orcs scattered and on the verge of being eradicated, it's up to four heroes to get the rebellion started again and to crush the human beings for good.
Advertisement:

To say that the game is filled with Toilet Humour would be putting it lightly. The orcs' main special powers are farting and belching. Farts can be ignited with fire (or another orc's burps) and have the same effect as a grenade, while burps can be used to burn, freeze, or even petrify the enemies.