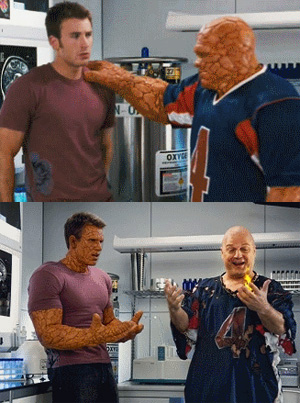 Even if a writer is avoiding science fiction, the modern age has seriously affected cultural notions of magic, be they mutant powers or deity/demon granted.

Powers and Special Abilities often seem to be "spiritual programs" in human beings. They can be added, removed, or copied without physiological change, and they're all "encoded" in the same way, so a device or person that can steal, detect or otherwise interact with "powers" will work on any superhuman, regardless of where their abilities come from. In video games, these abilities often use "MP" the same way a computer uses electricity.

Thus, if you need to increase your powers fast, just look around for an Upgrade Artifact! Forget about rolling your own powers, however — the tools required to create the programmed powers in the first place (such as a programming language and associated compiler program) are nowhere to be found, and nobody even thinks to ask about them. The closest anyone ever gets to exploring how all of this fits together is that the recipient has to initially be "reformatted" in some way or another before any "updates" can take hold. Compare Vancian Magic and Power Copying. May also overlap with Powers via Weapon. A subtrope is Discard and Draw, where the "diskspace" freed by losing one power gets utilized for another power afterwards. For powers that are performed through actual programming with mathematics, see Formulaic Magic. A subtrope of Meta Power. When combined with Shapeshifting abilities, this can result in a Transferred Transformation or a Physical Attribute Swap.

The Power Transfer Device is able to use blast cores to swap the powers of conduits.

The Power Transfer Device is able to use blast cores to swap the powers of conduits.