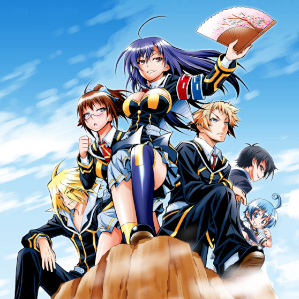 Just your everyday Abnormal Student Council.
"Your dreams are your own personal concerns...you should take on the challenge and fulfill your own dreams. However, your worries are my concerns. Entrust every last one to me!"
Advertisement:

Medaka Box is a manga series by author NisiOisiN (of Bakemonogatari fame), and artist Akatsuki Akira (of his "fame" as the ero-artist RIROLAND), about the paragon and all-around perfect student Medaka Kurokami, who is elected as the President of Hakoniwa Academy's student council by 98% of the student body. Possessed of a forceful personality, charisma, and incredible ability, she is accompanied by her loyal and snarky childhood friend Zenkichi Hitoyoshi, who has been at her side for over thirteen years.

Her first act is to set up a suggestion box where students can put in requests, which comes to be known as the Medaka Box. The series initially follows a standard formula where Medaka selects a request for help, then drags Zenkichi along into a complicated situation which is usually resolved by the chapter's end. For each completed request, Medaka has a potted flower brought into the Student Council room. Over the course of several chapters, Medaka manages to recruit two more members for the Student Council.

Thirteen chapters later, the series undergoes a Genre Shift: multi-chapter story arcs become the norm as Medaka discovers the existence of other students with inhuman abilities like herself known as Abnormals. There are also other students called Specials whose talents are not quite at an Abnormal level, and regular students like Zenkichi who do not possess any particularly special traits. All of them have been assembled under the auspices of Hakoniwa Academy's chairman, Hakama Shiranui. The whole Academy exists to support a project called the Flask Plan, whose goal is to mass-produce perfect humans by duplicating Abnormal talents in normal people.

And things only get more complicated from there.

Medaka Box went from a quirky Slice of Life high school comedy to a fighting manga, then Serial Escalation as each Big Bad's defeat brought a newer, more dangerous one onto the scene. An anime adaptation by Studio Gainax was announced; the first season aired from April 4 through June 21, 2012. A second season subtitled Abnormal ran between October 11 and December 27, 2012.

Making use of Misogi Kumagawa's groundbreaking popularity in the manga, Nisio and Akira released a Spin-Off one-chapter story with the aforementioned character, entitled Good Loser Kumagawa, published in Jump NEXT Magazine on December 26th, 2011, followed by a two volume Light Novel series of the same title. A "concluding chapter" of the Spin-Off was released in Summer 2013.

The series finished its run in Double Issue 22-23 in May 2013, after four years of serialization. According to its own wiki,

Viewers in the US may watch the anime legally at Crunchyroll.

Now with its own card game!