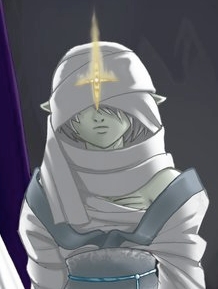 You could say she's... cross eyed! Oh-hohoho!
"Your eyes can deceive you. Don't trust them."
— Obi-Wan Kenobi, A New Hope
Advertisement:

The self-imposed version of being a Blind Seer or Blind Weaponmaster. A sighted character who has blindfolded vision can see just as well, if not better than if that character wasn’t blindfolded. The reasons for this vary, a mentor teaching the student that Your Eyes Can Deceive You may take it to the next level, invoking Disability Superpower and complementing it with Charles Atlas training to grant Super Senses, freeing the student from the tyranny of sight. Another possibility is the character's Psychic Powers and Third Eye are enhanced with sensory deprivation, or the blindfold is itself a powerful artifact that confers sight beyond sight a la X-Ray Vision.

Perhaps the most terrifying option is that the blindfold is a self-imposed handicap to keep an eye-related power under control. When the blindfold comes off, people fall down. Most importantly, Blindfold Vision provides copious quantities of cool.