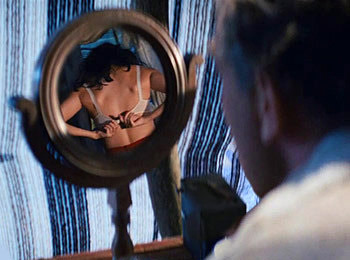 Alice and Bob are together and Alice needs to change clothes for some reason. Bob turns his back to allow Alice some privacy, with sometimes a "No Peeking!" Request being necessary for him to turn. However, either by accident or by design, Bob finds himself facing a reflective surface that allows him a view of Alice as she undresses.

Aside from Fanservice, a scene like this can serve several purposes. It can be used to ramp up the Unresolved Sexual Tension between two characters. Whether Bob chooses to watch or look away can tell the viewer a lot about Bob's character. And if Bob is unaware of the reflection but Alice turns around and sees it, it can result in Bob becoming an Accidental Pervert.

Compare Sexy Silhouette, where backlighting casts a silhouette of a character undressing on a screen. Not to be confused with Revealing Reflection.