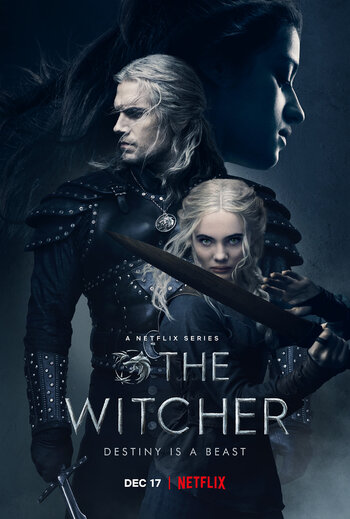 "People linked by destiny will always find each other."
"I don't see any side upon which you are not entirely fucked."
— Nenneke
Advertisement:

The Witcher is a Netflix-produced Dark Fantasy series adapted from Andrzej Sapkowski's book series, The Witcher, with Lauren Hissrich as showrunner.

Geralt of Rivia (played by Henry Cavill in the first three seasons, Liam Hemsworth from the fourth season onward), a solitary monster hunter from the dying order of the Witchers, struggles to find his place in a world where people often prove more wicked than beasts. But when destiny hurtles him toward a powerful sorceress and a young princess with a dangerous secret, the three must learn to navigate an increasingly volatile continent together.

The series premiered on December 20, 2019. Two additional seasons have been ordered, with the second season being released on December 17, 2021. A fourth season was ordered in October 2022, revealing that Henry Cavill would step down from the role of Geralt and hand it over to Liam Hemsworth.

An animated film, The Witcher: Nightmare of the Wolf, was released on August 23, 2021. It is set before the series, focusing on Vesemir (voiced by Theo James). A second animated film has been confirmed to be in development as of September 2021.

Netflix is also developing two spin-offs. The first, The Witcher: Blood Origin, will focus on the origin of the Witchers, 1200 years before Geralt's time. Declan de Barra will serve as showrunner, with Hissrich returning as executive producer. The confirmed cast members include Laurence O'Fuarain, Michelle Yeoh, and Sophia Brown. The second spin-off is said to be a family-friendly series, though details have yet to be disclosed.

The Vertigo Effect symbolizing the forest calling her.

The Vertigo Effect symbolizing the forest calling her.