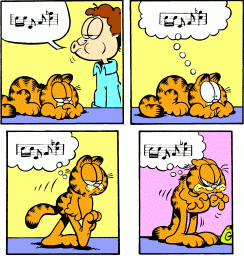 This song's gonna get stuck inside you!
Run but you can't hide, I'll find you!
"The song has ended, but the melody lingers on."
— Irving Berlin
Advertisement:

This is the song that doesn't end... It goes on and on in one's head.

This phenomenon is well-known in Real Life, so it's no wonder it frequently comes up in fiction as well.

Characters infected with an Ear Worm may find themselves prone to bursting out into the song in inappropriate places and shown liking the tune because it's irresistibly catchy. They can end up distracted in the middle of conversation (or other important activities) by the continuous snatches of song wavering between their ears. However, soon they'll be profoundly annoyed by it and tugging at their ears in fury. And it's only a matter of time before, like Darryl Revok, they drill a hole in their forehead to let the voices out.

Subtrope of Inner Monologue. Ear Worms are frequently the tool used to produce Psychic Static. Especially powerful ones can also serve as a Brown Note. If the repetitive music that is the cause of someone's woes is not just in memory but ongoing, it's Incessant Music Madness.

Although many of us have had experiences with Ear Worms, please stick to listing examples where a song's catchiness is commented on or demonstrated in-universe. Describing what makes a song catchy is almost impossible for most people who aren't music theory experts, meaning that the odds of subjective examples being Zero-Context Examples are extremely high (as was the case with a past version of this trope).