The Can Kicked Him 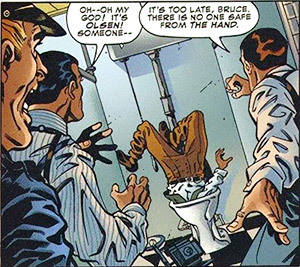 When Hulk want lunch money,
HULK GET LUNCH MONEY!
"In a fight, you have to be careful not to break the little bones in your hand on someone's face. That's why I like bathrooms — lots of hard surfaces."
— Michael Westen, Burn Notice
Advertisement:

When someone dies in the bathroom either while... occupied at the time of death, or if their death is directly brought about by use of the bathroom fixtures. The fictional bathroom can be a truly dangerous place. It is fraught with assassins, demons, and killer mutant creatures, to name a few. This is very possibly why Nobody Poops. Death or injury in the bathroom is a one-way ticket to a legacy of ignominy, and the prevalence of scary water-closet events seems to speak of a deeper human fear of vulnerability in this most private of places. Not to mention that some tricky assassins may exploit the assumed privacy and safety of the bathroom by Camping a Crapper.

In this sort of situation, the phrase "Make It Look Like an Accident" can take on disturbing subtext.

In real life, one possible heart attack symptom is for blood to gather in the veins of the lower intestine, making the person feel like they have to go #2. When you hear of people dying on the toilet, that's usually what happened.

This generally has nothing to do with Ass Kicks You. See Swirlie for less injurious (hopefully) examples. See Bathroom Brawl for fights that happen in bathrooms (although it is still possible for someone to get killed) and Camping a Crapper for someone getting attacked or killed in a bathroom without direct usage of the fixtures. For deaths probably adjacent to these, see Deadly Bath.

No Real Life Examples, Please! But if you're really curious, The Other Wiki has a list

Alternative Title(s): Killed With A Toilet, Kicked In The Can