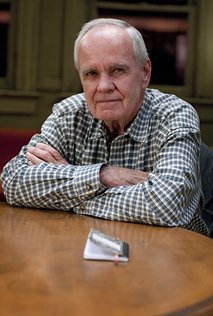 Looks like someone’s granddad. Writes stuff that would make Pol Pot cry.
“I’m not interested in writing short stories. Anything that doesn’t take years of your life and drive you to suicide hardly seems worth doing.”
Advertisement:

Cormac McCarthy (born Charles McCarthy, July 20, 1933) is an American novelist who has steadily risen in stature over the past 20 years. Though he has written since the 1960s, it was the publication of his book All the Pretty Horses in 1992, and its subsequent cinematic adaptation, that brought him widespread recognition.

Interest in McCarthy skyrocketed after The Coen Brothers’ Oscar-winning adaptation of his novel No Country for Old Men and the adaptation of The Road.

His reputation as one of the best living American writers was cemented in the placing of his book Blood Meridian or the Evening Redness in the West behind Don Delillo's Underworld and Toni Morrison's Beloved in a New York Times poll of the Greatest American novels of the last 25 years.

A reclusive author, McCarthy surprised everybody when he agreed to give his first-ever television interview after Oprah Winfrey selected The Road for her famous Book Club.

While McCarthy has written books in genres such as historical fiction, Southern Gothic, crime and post-apocalyptic science fiction, most of his works are, at heart, Westerns. His books are infamous for their extreme content and use of Gorn. Murder, defilement, and wanton slaughter are par for the course for his works, so be warned if you choose to read them. That being said, they are also often said to be strongly written and deeply affecting. Common themes include existentialism, the importance of decency, the brutal reality of human nature, and the potential for evil that lurks within us all.

His books are also notable for their stylistic idiosyncrasies. McCarthy refuses to use commas, quotation marks or exclamation marks, and is fond of using extremely long run-on sentences when describing scenes. He often combines these traits for horrific effect, such as describing scenes of barbarity in long, breathless paragraphs that communicate what's going on with feverish intensity.

In early 2012, he made a big splash by selling his first screenplay, titled The Counselor, a drug thriller about a naive attorney who becomes involved in the drug trade. It was immediately picked up by the producers of the film adaptation of The Road, with Ridley Scott signing on to direct.

Works by McCarthy with their own pages include:

Other works by McCarthy contain examples of: