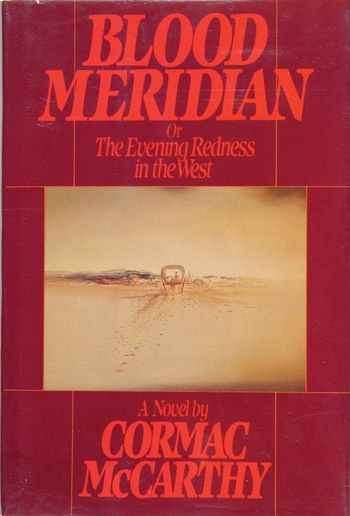 This is my claim, he said. And yet everywhere upon it are pockets of autonomous life. Autonomous. In order for it to be mine nothing must be permitted to occur upon it save by my dispensation.
I dont see what that has to do with catchin birds.
The freedom of birds is an insult to me. I’d have them all in zoos.
Advertisement:

Also known as The Evening Redness in the West, this 1985 anti-Western novel by Cormac McCarthy is extremely dark and esoteric, much more so than his already dire previous works. It’s a thorough deconstruction of the Wild West and Injun Country, and its main theme, such as it is, could be reasonably argued to be the darkness and ugliness at the heart of The American Dream.

The novel follows a teenage runaway, only known as The Kid, who by coincidence stumbles into the company of the Glanton Gang. This troupe of historical scalp-hunters and later outlaws are employed by the Mexican government at Chihuahua to exterminate the native tribes waging war against the settlements of the surrounding countryside. Needless to say, it’s not positive reading.