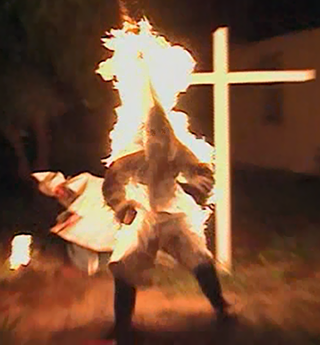 Keen karma for The Klan.
Old Lady: Oh Gob, you could charm the black off a telegram boy!
Narrator: Okay we'll just tell you now. She's the one who dies.
— Arrested Development, "S.O.B.s"
Advertisement:

Imagine, for example, a Chinese or Middle Eastern character in an American film. He may (or may not) have adopted the culture and speech of the country that he lives in, but he may also occasionally speak in his native language. While most of the other characters think nothing of it, there is one character who harasses him, insisting he should only "speak 'Merican, dammit!" That one character is also given the most humiliating death scene in the entire movie. What we've just seen is Death by Racism. When it happens to one-shot, otherwise flat characters, it's more of a convenient way to treat the audience to a visually stunning death without having to display a title card afterwards reading "Trust us, he was a dick." Often, though, the killer will not even care that the victim was a bigot, having just chosen a target at random — which makes this more Kick the Son of a Bitch. The killer might even be a bigot themselves, and it's just that bigotry was irrelevant in this particular killing. If the killer is also portrayed as an incompetent failure of a human being, see Sub-Par Supremacist.

This trope is most common in shows that have a single Token Minority, but it can also turn up in shows with a Five-Token Band. When taken to extremes, it can become Narm or be an obvious Author Tract. Often overlaps with Bullying a Dragon or Mugging the Monster. Compare Politically Incorrect Villain and Asshole Victim. Contrast Vasquez Always Dies and Black Dude Dies First. When a character's racism directly causes their death, that's a form of Laser-Guided Karma.

Note that if done badly, this could be a case of Strawman Has a Point and Felony Misdemeanor. If the target of the insult was himself an Asshole Victim, or the outburst the writers considered irredeemably racist comes off to certain audiences as excusable, the death may not seem like the Karmic Death it was intended to be.

Carter Daniels from "The Final Destination" suffers a humiliating death whilst trying to burn a cross on a black man's lawn. Death quickly comes for him, dragging his burning body across the road similar to a lynching. All while set to War's "Why Can't We Be Friends".

Carter Daniels from "The Final Destination" suffers a humiliating death whilst trying to burn a cross on a black man's lawn. Death quickly comes for him, dragging his burning body across the road similar to a lynching. All while set to War's "Why Can't We Be Friends".