Literature / The Bonfire of the Vanities 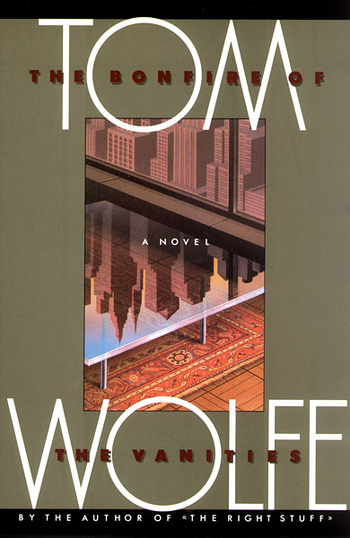 "If you're going to live in a whorehouse, there's only one thing you can do: be the best damn whore around."
— Peter Fallow
Advertisement:

The Bonfire of the Vanities, written by Tom Wolfe, was originally serialized in Rolling Stone in 27 installments starting in 1984. It was then heavily revised and published in novel form in 1987.

Sherman McCoy is a married Wall Street investment banker and self-proclaimed "Master of the Universe" who carries on an affair with socialite Maria Ruskin. One night, they take a wrong turn in the Bronx and encounter two (supposedly) threatening black youths. In their panic and confusion Ruskin, who is driving, accidentally runs over one of them; he is left in a coma. When word of this breaks out, all hell breaks loose for McCoy. Meanwhile, an Amoral Attorney, a boozy tabloid reporter, a Strawman Political religious leader from the Bronx, an ambitious district attorney, and... well, the bulk of characters that the book follows decide to use the racially- and socially-charged case to further their own agendas.

In 1990 The Film of the Book was released. Directed by Brian De Palma and starring Tom Hanks, Bruce Willis, and Melanie Griffith, it was a critical and commercial disaster. Film critic Julie Salamon was granted full access during the Troubled Production and her 1991 nonfiction book, The Devil's Candy, explains what went wrong. 30 years later, this became the basis for the second season of Turner Classic Movies' documentary podcast The Plot Thickens.

The novel and film feature examples of:

Alternative Title(s): The Bonfire Of The Vanities