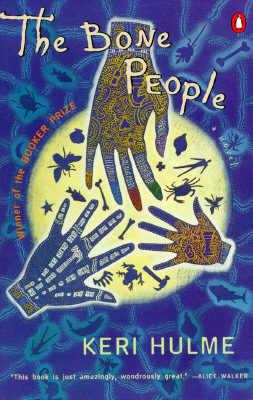 The Bone People by Keri Hulme (or to use the author's preferred capitalisation, the bone people) is a literary novel that was published by a small press in 1984 and famously went on to become the first New Zealand novel ever to win the Booker Prize (Eleanor Catton's The Luminaries became the second). It is the story of a painter, Kerewin Holmes who is estranged from her family and lives a reclusive life until she finds a young mute, mystical boy called Simon Peter has broken into her home. A friendship develops between Kerewin, Simon and Simon's adoptive father Joe Gillaley. Just as Kerewin is coming out of her shell and a new family seems to be being formed, Kerewin realises someone has been horribly physically abusing Simon and things get nasty.
Advertisement:

The Bone People is something of a joke in New Zealand as it is widely acknowledged as being a famous novel no one reads, because of its supposedly incomprehensible prose style. It is ultimately a worthwhile read to anyone who likes a challenge. Hulme spent many years promising a follow-up novel; unfortunately, it was not to be, as she died in 2021.