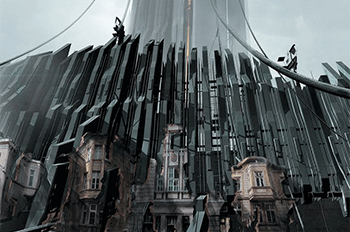 Make no mistake - this thing is not protecting you, it's keeping you contained.
"The wall does what the wall was supposed to do. It closes us in. It holds us back. It shuts us off from the rest of the world. Now we can get to the other side, but we’ve gotta climb over it or go around it or just knock it down. We’re never gonna get anywhere if we just stand and bang our heads against it."
— Melanie, The Women of Brewster Place
Advertisement:

Historically, walls have traditionally been understood as a measure of protection, designed to keep any threats to society out. The image of a mighty stone construction, surrounded by heavily armoured guards fighting to protect the people from the invaders is easy enough to understand and has captured the imagination of many cultures.

However, there is a darker side to this protection, what keeps one out, after all, can also be used to keep one in. It doesn't take much thought to imagine the towering walls as ominous symbols of control, surrounded by heavily armed thugs willing to kill at the slightest hint of disobedience.

Sometimes the cities and lands around are surrounded by impenetrable walls, not to keep the people safe but to ensure that they cannot escape or resist. After all, walling of the city ensures not only a vast restriction on movement but also that any supplies and resources can only be moved in with the permission of the overlord, enabling whatever taxation they may choose and even a total blockade in the event of civil disobedience.

The restrictions on who may enter also aid to control over the spread and flow of information, preventing the incursion of any ideas that would be unwelcome by the ruling regime and making it easier to distribute their propaganda.

At its peak, walling the area can provide total isolation of the people away from The Outside World enabling the ruler's absolute power over the inhabitant's lives.

The walls do not necessarily need to be impenetrable to fulfil this trope, sometimes it might even be relatively easy in practice to escape, sometimes they are more a symbolic, acting as a deterrent to even seek the outside world.

Can overlap with Fantastic Ghetto if the walls that are used to cage in the inhabitants are emphasised.

Compare The Great Wall, when the focus is upon the wall itself rather than what it represents, and The Wall Around the World, when the focus is instead upon the mystery of what exists beyond the wall. Contrast Citadel City, when their presence of walls is portrayed positively (or at least neutrally) with the presence being clearly for defence and protection of the city and its citizens.

Due to differing political opinions on what counts as oppression vs justified protection, No Real Life Examples, Please!.

Note: To qualify for this trope, the walls themselves must be presented as a tool of control and despotism, rather than any settlement with an oppressive regime that is surrounded by a wall.