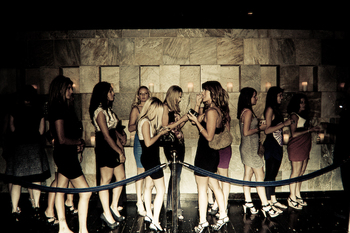 The Coolest Club Ever must have a line outside composed of people yearning to be found cool enough to enter; alas, they're Not on the List. This is the Wannabe Line. Its main purpose is to be there for our hero to be whisked past, so we may know that our hero is cool. Alternatively, our hero may be trapped there with everyone else, to remind us that, although we know they're cool, no one else does. In Real Life, the Wannabe Line is usually for clubgoers who lacked the foresight to get there before the club reached capacity, and coolness or lack thereof doesn't enter the picture as often as TV Land would have us believe.

Banishment to the Wannabe Line is always adjudicated by a team of monstrous Bouncers.

Compare No Fame, No Wealth, No Service.