Money to Throw Away 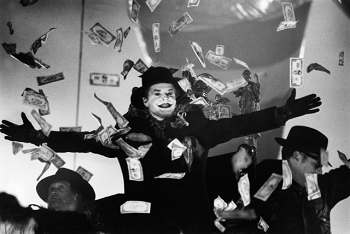 A man so generous it will put a smile on your face.
"What's wrong? Even if it were not a monstrous sin to steal sacred property of Rome, you then ride through the streets on a litter, shouting and singing and broadcasting your theft to all and sundry!"
— Vorenus, Rome
Advertisement:

A character has just acquired a vast sum of money. Maybe he won the lottery, inherited a fortune, or knocked over a bank. Instead of safely investing his newfound wealth, buying something nice, or doing anything even remotely useful with it, he instead tosses handfuls of cash at anyone lucky enough to be walking by. Implies the character literally has more money than he knows what to do with. It might also be part of a Money Fetish.

A variation can happen in a Chase Scene, where a character throws out money for the crowd to block his pursuers, often for the rule of Throwing the Distraction. For people who weaponize coins as weapons see Abnormal Ammo and Improbable Weapon User.