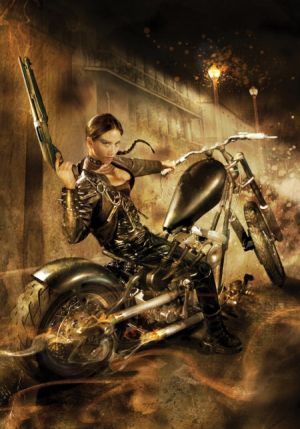 This ongoing fantasy written by Faith Hunter features the strong and sexy Jane Yellowrock, the last of her kind, a skinwalker of Cherokee descent who can turn into any creature she desires and hunts vampires for a living. Back from hiatus, she’s hired by Katherine Fontaneau, one of the oldest vampires in New Orleans and the madam of Katie’s Ladies, to hunt a powerful rogue vampire who’s killing other vamps. Once she solves that case Jane finds herself caught up in the vampiric politics which cascades her into a series of unwanted adventures. This is a series of Urban Fantasy novels that are half romance, half Transformation Comic, with elements of Supernatural Romance thrown in.
Advertisement:

So far there are ten published books in the series and three series of short stories: