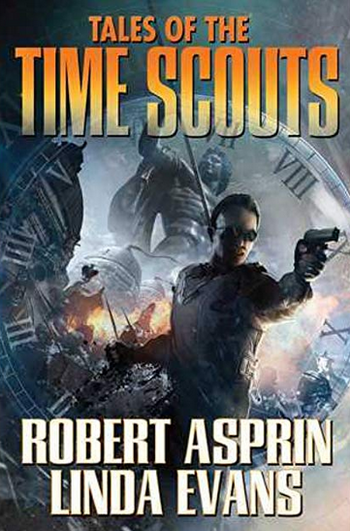 At some time in the recent past, there was The Accident. It caused massive destruction along all the world's coastlines, killing millions. Now it's a World Half Empty, as The Mafia's connections with construction means that they've gotten incredibly rich and powerful during reconstruction of the world's coastal cities. Also, there's the time strings. Shortly after The Accident, mysterious portals began to open, allowing people to step into the past. Only the Time Scouts are crazy enough to step through an unexplored gate, into an unknown and dangerous history. Also, you can't exist in two times at once, adding the risk of Shadowing yourself and dying instantly...
Advertisement:

Known as gates and strings, the time portals are now part of a tourism industry. Some gates are owned by private companies, some by the government. There are a number of laws related to the use of the gates and profits thereby.

Set 20 Minutes into the Future, the Time Scout books by Robert Asprin and Linda Evans follow the lives of the residents of Time Terminal 86, Shangri La Station, La La Land. Much of it involves time travel.