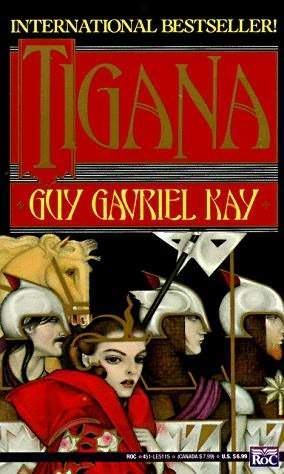 Tigana is a 1990 fantasy novel by Guy Gavriel Kay. It takes place in the Peninsula of the Palm, a Fantasy Counterpart Culture for medieval Italy. Two foreign conquerors occupy the Peninsula: Brandin, king of Ygrath, and Alberico of Barbadior. They have carved up the land between them, and hold it in an uneasy balance of power. The main focus of the story is on a group of rebels who seek to liberate the area, but must defeat both tyrants at the same time, lest one overrun the Peninsula. We also see the viewpoint of Brandin, as well as Dianora, a concubine bent on assassinating him.

During Brandin's conquest, his son was killed in the province of Tigana. In retaliation, he razed the area flat, and put a curse on it that no one outside Tigana would know of its name or history. He turns out to be a competent ruler, cultured, if arrogant, and likable... but is that enough to erase his prior sins?